You are here: Home / About Us

The Oregon State Building and Construction Trades Council represents 30 affiliated member unions that are highly skilled in a wide array of crafts. These men and women are an intricate part of Oregon’s workforce, our region’s economy, and future economic prosperity.

The Oregon State Building and Construction Trades Council was formed in 1940 to bring the needs of unions from all building-related trades together in an effort to protect the welfare of workers and learn from one another. Together, we’ve been able to have a voice in the State Legislature, fighting for local jobs, fair wages, funding for major infrastructure projects and more. We continue to fight for our members and their families everyday.

This can be seen in our apprenticeship programs, which have been improving construction in Oregon since 1931. Oregon was the second state in the nation to establish apprenticeship training at the state level. These programs allow us to continue great traditions of quality work through today. Our history of passing traditions and best practices from one generation to the next has allowed us to become a leader in sustainable building. Contractors rely on our tradesmen and women to achieve LEED certification. 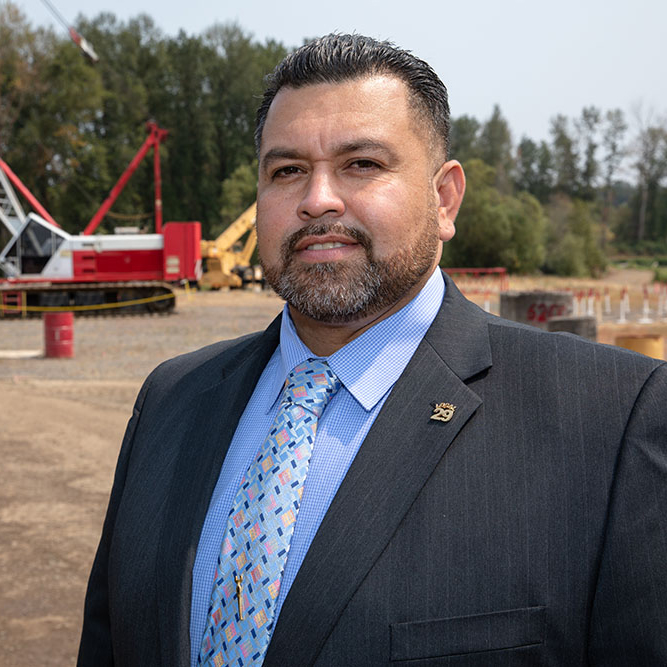 It is our unwavering belief in the social contract that motivates our efforts to improve the quality of life of workers, both in the workplace and in the communities where we live and raise our families. These values are the foundation of our political efforts to promote policies that are important to all construction workers, such as the right to organize. Strong wage and hour laws, safe working conditions, and funding for capital infrastructure have been our top agenda items for quite some time, and we expand this scope to other issues as necessary.

The recent recession changed both the political landscape and the way our elected officials approach the policies they seek to advance. Too often this manifests itself in a false choice between jobs versus a strong workforce or jobs versus our environment. Nothing can be further from the truth. Economic growth, strong workforce protections, and environmental stewardship are not mutually exclusive ideas, despite their being presented that way by people whose motivations are narrowly focused on only one side of these issues.

From the earliest days of the American colonies, when apprentice laborers in Charleston, S.C., went on strike for better pay in the 1700s, to the first formal union of workers in 1829 who sought to reduce their time on the job to 60 hours a week, our nation’s working people have recognized that joining together is the most effective means of improving their lives on and off the job.

Our 21st century workplace rights and protections—such as the eight-hour day and laws covering safety and health on the job—have been won by the struggles and sacrifices of working men and women who were empowered by the strength of solidarity and whose actions embodied the America dream of fairness and an opportunity for all to succeed.

The trade union movement in the United States originated during the early years of the republic. Skilled workers were the first to organize and form unions. During the 1790s, unions were formed by shoemakers of Philadelphia, tailors of Baltimore, the printers of New York City, and groups in other large cities. Sporadic work stoppages occurred during the early decades of the 19th century, although strike leaders were fined and imprisoned for what was termed “conspiracy to raise wages.”

In 1827 several trade unions in Philadelphia banded together to form the Mechanics’ Union of Trade Associations, the first U.S. labor organization to unite workers in different crafts. Besides acting to raise wages and improve working conditions, these united labor organizations espoused certain social reforms, such as the institution of free public education, the abolition of imprisonment for debt, and the adoption of universal manhood suffrage. Perhaps the most important effect of these early unions was their introduction of political action. Organizing and growth in the labor movement was stimulated by the decision of a Massachusetts court in 1842 (Commonwealth v. Hunt), stating that strikes to improve labor conditions were lawful and were not criminal conspiracies.

The AFL represented a form of so-called business unionism. This basically meant that it was a loose confederation of unions, each with exclusive rights to deal with the workers and employers in its own field. Instead of campaigning for large sweeping reform programs that were so popular in that day, the AFL confined itself to the pursuit of specific, attainable goals, such as higher wages and shorter hours. The AFL prided itself in not identifying with any one political party or movement, but instead adopted the policy of urging its members to support candidates that were considered labor friendly regardless of party affiliation.

During the 1890s several of the AFL unions, including those in the printing and the building trade workers unions, finally achieved the long-sought after goal of the 8-hour work day. Nevertheless, the movement moved along slowly until the 20th century. Prevailing opinions were still hostile towards organized labor, and the fact that both government and the courts acted to restrain union activity didn’t help matters much either. The depression in the early 1890s and a few disastrous strikes stunted the growth of the union as well. In the historic strike (1892) at the Homestead Mill of Carnegie Steel in Pittsburgh, large numbers of private detectives and national guardsman were used against the striking workers to the extent that the strike was lost and the union nearly destroyed. In 1894 striking railroad workers against the Pullman Company were defeated by an injunction issued under the Sherman Antitrust Act of 1890. What that Act basically said was that it was illegal to restrain trade. Employers used this tactic with increasing frequency, and were very effective with it.

By 1904 more than 2 million workers were members of trade unions. Almost 1.7 million belonged to the AFL. By this time many industries including construction, publishing, glass, ceramics, coal, and railroads had begun to accept collective bargaining with unions. In 1913 the U.S. Congress created the Department of Labor, assuring that the problems of labor would receive its due consideration. Massachusetts enacted the first minimum wage law in the United States in 1912. These achievements contributed to a sharp rise in membership. By 1920 trade unions had about 5.1 million members, of which 80 percent were in the AFL.

During the 1920s the trade union movement was on the decline, due largely to the depressions of the 1920s and 1930s. The election of Franklin D. Roosevelt to the Presidency in 1932 marked the beginning of stimulating new growth in the union movement. In June of 1933 the National Industrial Recovery Act was enacted. One of the most controversial sections of this law stipulated that “employees shall have the right to organize and to bargain collectively through representatives of their own choosing, and shall be free from the interference, restraint, or coercion of employers… in the designation of such representatives.” In May 1935 the Supreme Court ruled this to act to be unconstitutional but two months later congress enacted the National Labor Relations Act which provided even stronger government support for organized labor.